End-of-season sale! 40% off everything. Limited offer!

The summer is here and with it comes lazy days by the pool, amazing days on the beach, nice hangouts at the bar and pink swim shorts. And with this it easily comes to the fact that you will be using the same swim trunks all day. From the floaty in the pool in the morning to the drink in the bar on the afternoon.

Therefore it’s important to find a pair of swim shorts that is more than just a regular pair of swim shorts. They need to be trendy and fun so that they fit in every situation, not just around the pool but during the rest of you day aswell. A pair of regular one colored swim trunks just won’t cut it. You want your swimwear to stand out from the crowd of the one colored black and blue swim shorts, and what would stand out and make statement more than a pair of pink designer swim shorts! 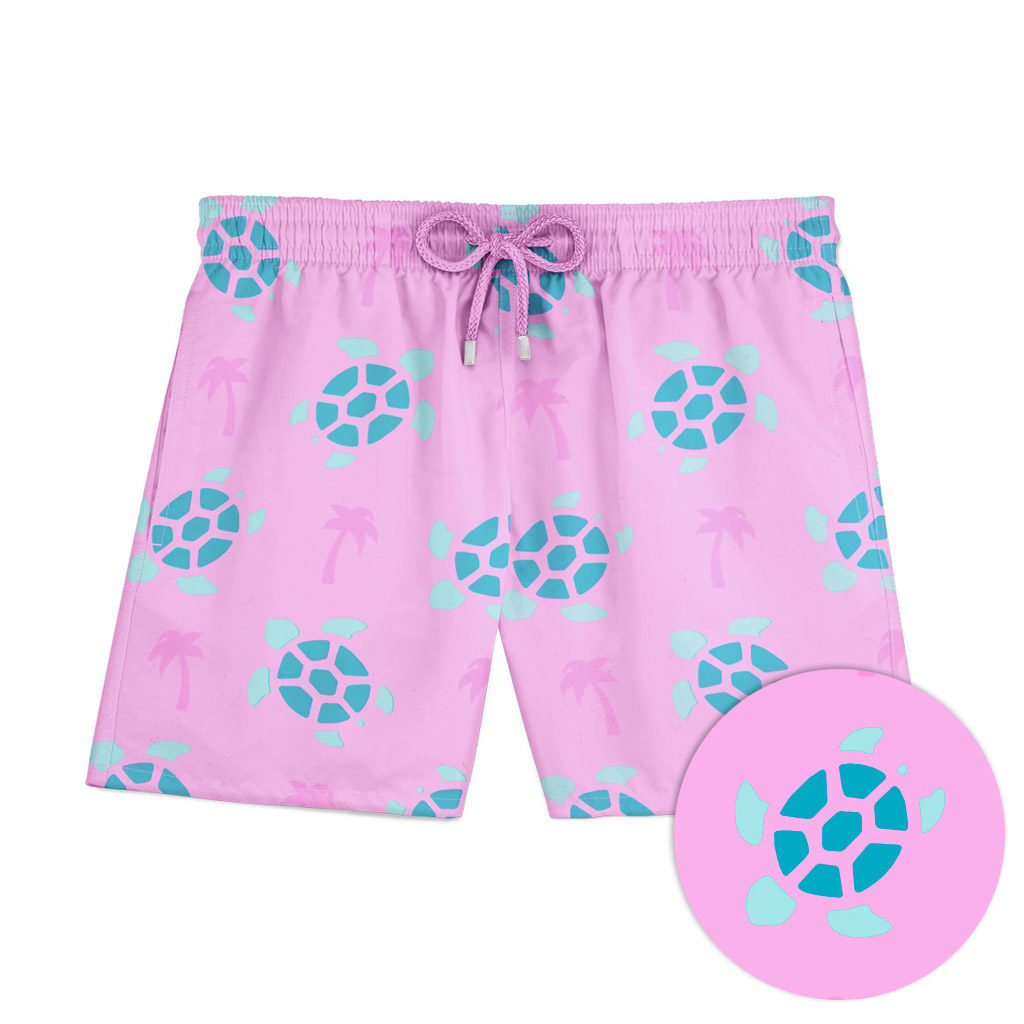 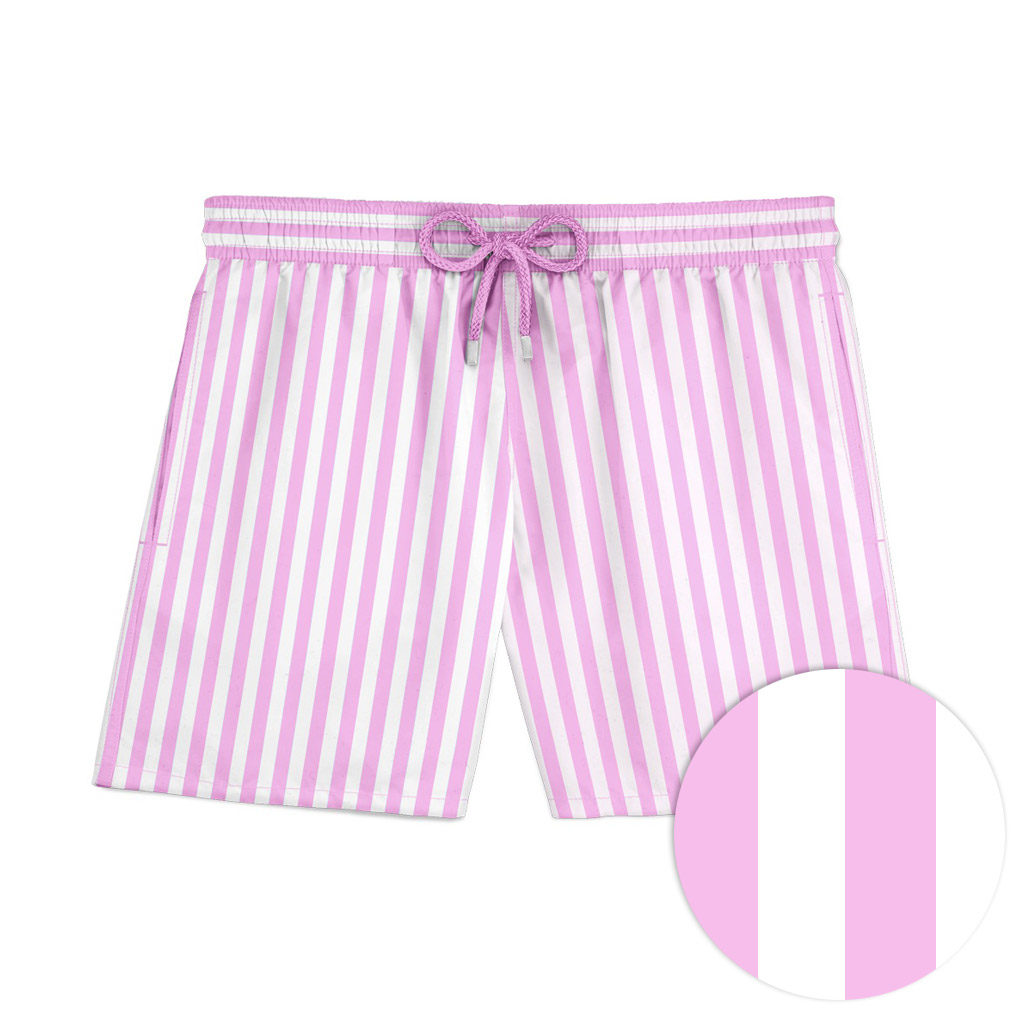 Womens swimsuits and bikinis has been pretty and trendy in different colors and cool patterns for ages. But it’s first now that design companies has started to create and design nice and trendy swim trunks for men.

Pink has long been a color that men has shun away from, but not any longer. The designer companies made sure that these new swim trunks where very trendy and appealing when they put the pink designer swim shorts on the map. Pink swim shorts for men has fast become trend because they are fun, colorful and stand out in a crowd, and we are not too late to join this trend. 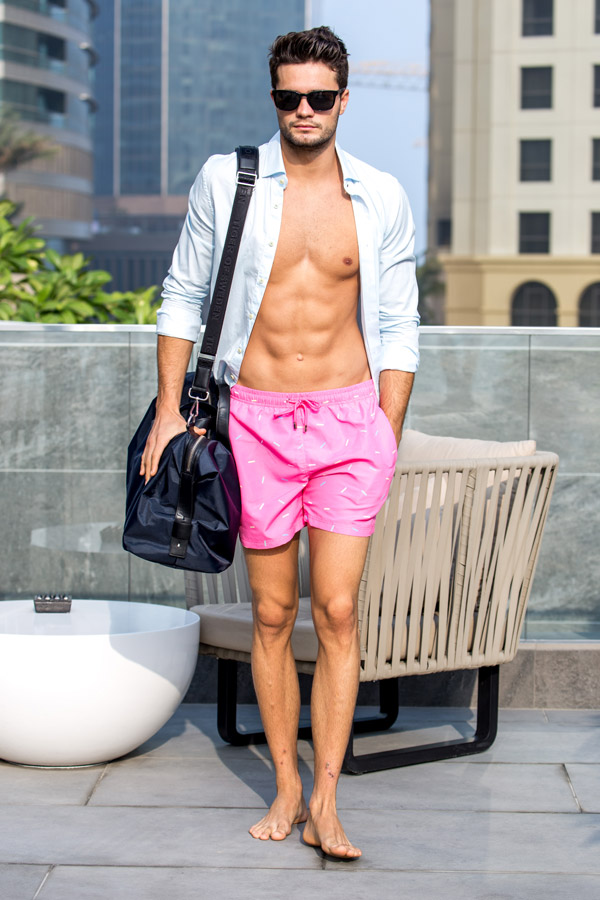 Are you a man and are interested in joining the trend with pink swim trunks, but you feel like the neon pink might not be your style? Then there are of course other options to choose from. The pink and white striped swim shorts are a lighter shade of pink which is more toned down but is maintaining the trendy look with it’s playful pattern. These pair of swim shorts is far from the regular boring all black swim trunks but at the same time it’s not super highlighted and in your face with the color or the pattern.

Do you want to join the new trend with pink swimwear for men but want something more than just a splash of color on your swim shorts and are considering a bit more patterned style? Then the pink turtle palm swim shorts is something for you. With an elegant and stylish pattern of cute turtles and calm palm trees against a soothing pink background you’ll be sure to get a lot of attention and compliments on the next pool party. Of course these shorts also have fine mesh linen on the inside so that you can be trendy and comfortable all day long.

For the really bold ones that want to really make a statement with new trendy pink swim trunks there’s the neon pink swim shorts with sprinkles. These hot pink swim trunks has a pattern of colorful sprinkles that you easily can pair with the well known pink donut pool floaty that is popular on instagram right now. These floaties are also the inspiration behind these swim shorts so you can combine these two items and look like the top of the party. They are also equipped with two side pockets and one backpocket so that you with ease can use these swim shorts both at the beach and at the bar with no fuzz. 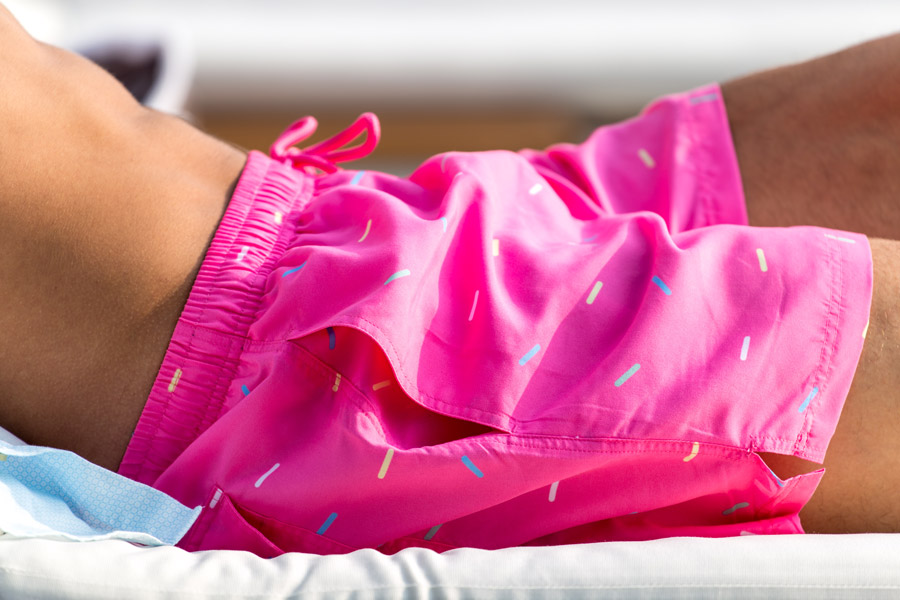 We love this new trend that has flourished to finally make place on the market for pink swim shorts for men. It’s time to let go of the one colored boring and the lame colorless swimwear that we used to wear for ages. It’s time to go crazy with new fun colors and trendy patterns.

The beach is the place to let lose and have fun. And for years we have seen pool floaties in all kinds of different colors, shapes and sizes, and it is finally time for our swimwear to take the same route, new and crazy colors with perhaps a dash of sprinkles or palm trees. It is time to match your cool floaty with awesome pair of equally cool swim shorts.

The fact that there has been pink swimwear for women around for ages is hardly news to anyone. But pink has been pretty much a women’s only color for all this time, but not any more. It is time for the men to enter the stage with a striking new look. Let’s not be afraid to wear pink, let’s embrace pink and show the world just how trendy it is. Does your partner have pink swimwear? Why not match them with your new pink swim shorts, because there is no color that matches as well as pink.

Pink swim shorts are not in any way just for adults so let’s just face the truth. No child ever would just want a pair of all black or all grey swim shorts when they could have a cool pair of colorful swim shorts with fun patterns on it instead. And when you get a pair of trendy pink swim shorts it wont be long until your child also wants a pair to match yours. Luckily there is a lot to choose from in the kids section. Everything from neon pink to a softer pink between different shades of pink and al ot of fun patterns. 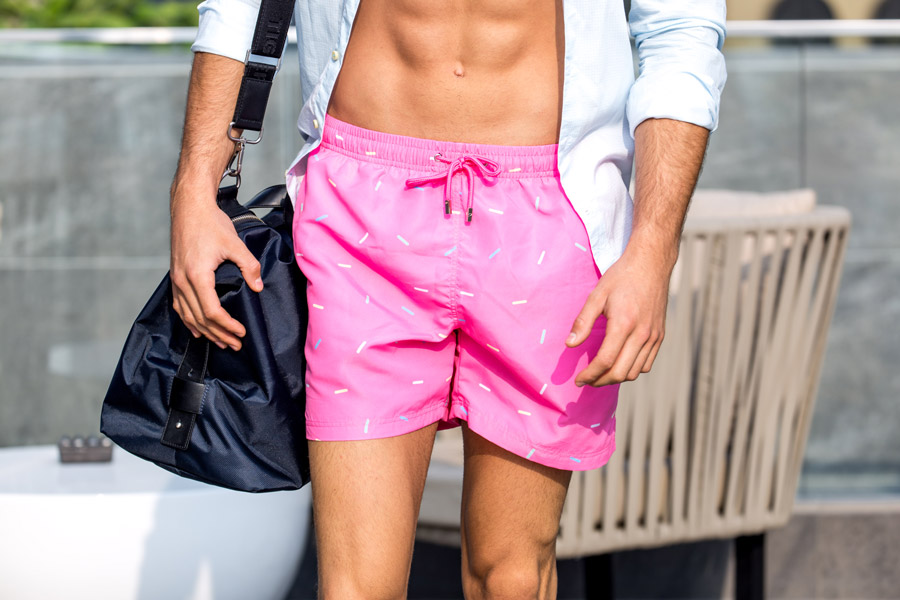 For long, men haven’t had much to choose from when going to the beach. Mostly plain straight swim shorts or trunks. At the same time, beach fashion for women seem ever so popular with everything from colorful swimsuits to perfectly designed bikinis.

But lately that’s begun to change little by little. You now see fashion and swimwear brands putting a little more of a design touch to mens swimwear. And you also see guys going for more designer shorts. For the last couple of years men have been going for more and more prints and patterns when shopping for swim shorts. This is a trend that we only see more of every year.

This year we see the next trend, men’s pink swim shorts. Guys who dare to stand out and have an outgoing personality are now going for pink swim shorts when spending the day at the beach or the hotel pool. We see the trend starting at major cities around the world and are sure this will be the next big thing for men at the beach.

What do people think of the trend?

When asking people at South Beach, Miami, about what they think of men’s pink swim shorts most men says that the think its cool but they are not sure if they could pull it off themselves. However, they say that they definitely would consider going for a pink pair of shorts next time they are going shopping.

The guys we found wearing pink swim shorts at the beach said it’s a no-brainer, ”just go for it” two guys says as they are opening a bottle of champagne. We follow the latest fashion trends in general and this is our absolute favorite this year, they said.

And what does the girls say? They love it! We didin’t find a single woman that wasn’t a fan of the trend. ”I’ve seen it in Miami all summer and I’m sure it’ll be on beaches all over the world next summer” said Amanda. ”Just look at them” she adds, pointing to a group of guys playing volleyball, ”it’s a fresh and very summer looking”. 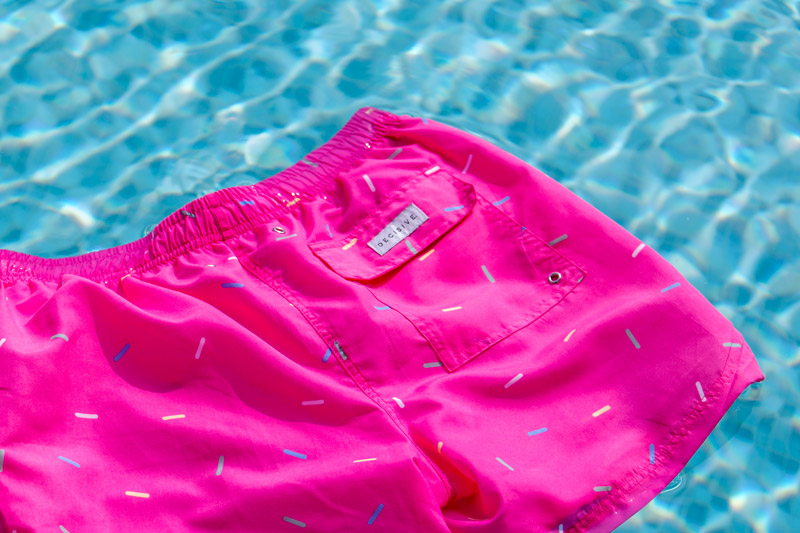 The most popular designs

The most popular of men’s pink swim shorts are the sprinkles or donut design, a continued pattern on a pink background. Inspiration comes from the popular inflatable donut ring that’s been seen on Instagram for a while now. It’s everything we love about the inflatable ring put on a pair of shorts.

Another very popular design is the abstract pink patterns. This could be either hard edged lines or softer could-like designs.

What to look for when buying pink swim shorts

When shopping for pink swim shorts there’s a few things you need to have in mind. First of all it’s a fine line between stylish and too much and playful and childish. Of course the shorts will make you stand our and be visually loud. But you still don’t want to look like a man-child with no style.

The sprinkles design is a great example of a design that’s playful and not too much. While going for pink mini pigs might be considered a little childish.

Make sure you find a pair of shorts with high comfort. After all you will probably use them the whole day. You want to be able to both go have lunch in between you volleyball games and do backflips from the cliffs.  Therefore you need a pair of shorts with a smooth inner mesh that brings you the comfort you need for a full day. Make sure it’s at least as soft as you regular underwear and not too tight.

These days most men use their swim shorts the whole day, not just when swimming. Therefore you need to make sure that you get a pair of shorts that is suitable for every occasion; the bar, pool and beach club.

What does the people in fashion say?

They’re also convinced that this is the hottest trend right now. Most people that we talked to at GQ and Esquire said that it’s a huge new trend for 2018 and will be everywhere 2019. It’s easy to see how this trend started. People love to wear vibrant colors, especially on the beach. But most men didn’t wear pink swim shorts. However, now that it’s common all around the world we see a rising demand for the pink swim shorts. 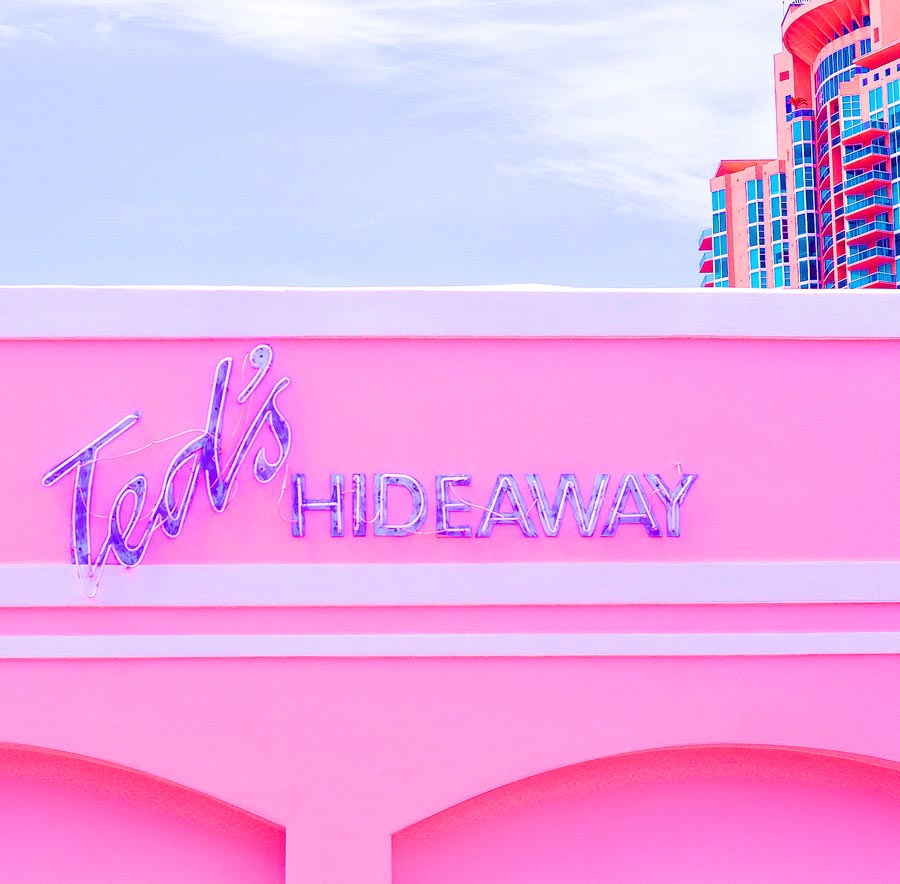 And it’s not just cheap colored shorts from any H&M store either. Many high end fashion designers are following the trend and are now designing their own take on the pink swim shorts for men. However, these designers usually charge ridiculous amounts for their shorts. So even if you like them there is no way you’d spend 1000 dollars on a pair of swim shorts.

Try to find yourself something in the mid range. Here you can find great designs and high quality that doesn’t ruin your budget. The most important part is that you find a pair of swim shorts that you a comfortable in. 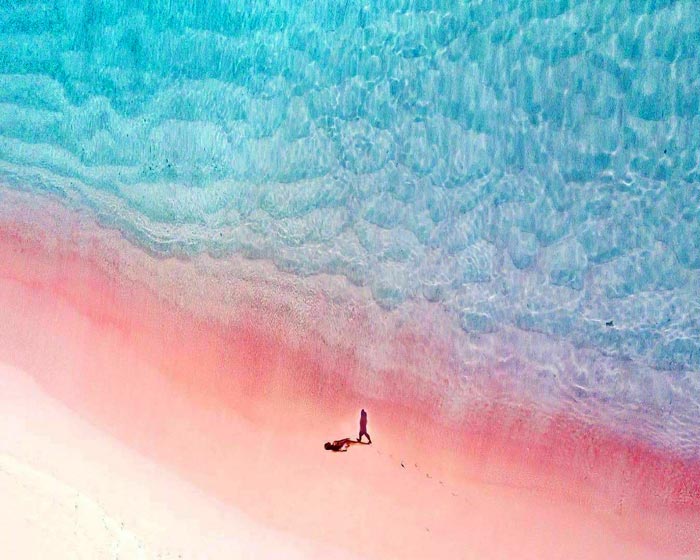 Posted in swimwear.
Share
PreviousHow many swim shorts for vacation
NextBoard shorts with and without liner [Complete guide 2022]